“And the day came when the risk to remain tight in a bud was more painful than the risk it took to blossom.” ─ Anais Nin

The last Saturday in January I did a book signing at The Toadstool Bookshop in Milford, New Hampshire. The Toadstool, as it is called by readers in this area, is a gem. A small independent bookstore, The Toadstool reaches out a hand to local authors and I was thrilled to be sitting there for my first book signing. I have attended several book signings held by authors I admire. Signing MacCullough’s Women was definitely an experience I would describe as a thrill enhanced by hearing the event advertised on New Hampshire Public Radio earlier in the week as I was driving home. 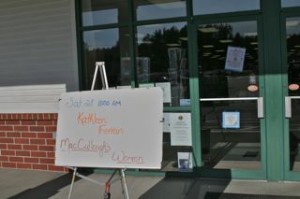 The staff did a fantastic job making me feel welcome. The weather cooperated by handing me a sunny day, unusually warm for the end of January in New Hampshire. I had already been warned not to feel bad if nobody came because frankly that’s the way it often goes especially for first time authors. It would be pretty hard for me to feel anything but pleasure in a bookstore. They have always been, and continue to be, my places of refuge. I love to watch people as they browse the shelves finding treasures. The Toadstool, with it squishy couches, chairs tucked into corners and walls papered with posters of bookcovers, is especially appealing.

Several friends came out to lend moral support. I was so happy to see friendly faces. I chose a scene from MacCullough’s Women to read that I feel provides readers a view into the complicated relationship between Brid, Drew and Neil.

I am always in search of my tribe – the readers who enjoy the kind of fiction I am writing and I love to read. It was fun to hear how people felt about my characters and to learn what they hope will be in future books in the Lynton Series. 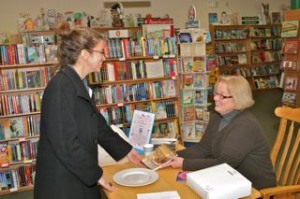 Meeting a member of my tribe

It was gratifying to have several people stop to buy the book after they overheard my conversation with the people around me. I did have cookies but not everyone took one so, I am pretty sure they bought the book because the story appealed to them.