You think dogs will not be in heaven? I tell you, they will be there long before any of us.—Robert Louis Stevenson (author, Treasure Island) 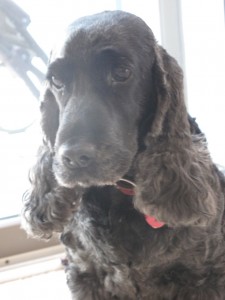 Grace trotted into our lives during a time of great sorrow. Our English Springer Spaniel, Admiral Halsey, had recently died tragically. He was six and half years old. Almost demented with grief, I desperately needed another dog. Grace was available because at the last minute the family she was destined for decided they didn’t want a black dog. Grace was left behind when her brothers and sisters went to their new homes. All her life she was slightly anxious and those two weeks alone with her mother may have been the reason why.

Halsey was a beautiful dog, bearing a striking resemblance to his grandsire, Salilyn’s Condor, who won Best of Show at the Westminster Kennel Club Dog Show in 1993. He completed four levels of obedience, earning the equivalent of a PHDog. Grace had big paw prints to fill. Knowing her as I do now, I realize if she had found those paw prints she would have squatted over them, the same way I have seen her squat over Halsey himself in the dog cemetery on Bailey Island.  Grace was not impressed. You could almost see her thinking, Halsey, Halsey, Halsey! Who gives a damn about old Halsey? whenever his name came up.

A smallish English Cocker Spaniel, Grace was not, as they say in the dog world, “typey”.  Her nose was too long, her chest too narrow and her feathers not curly enough.  Grace, however, thought she was “such a pretty girl” because we told her she was and so did the many people who admired her during her walks around the North End of Nashua. We named her Grace, after Admiral Grace Hopper. All our dogs were admirals thus outranking Mike who is a commander. 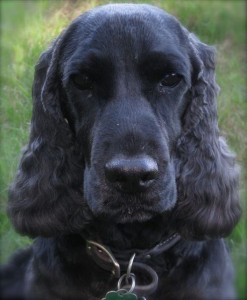 Grace distinguished herself in other ways. She failed Obedience Level One and had to repeat it. Ate her Gentle Leader. Never learned “Leave it.” but cleverly taught us to “Trade.” (for food, of course) instead. She was also iffy on “Come.” but would turn up for an obnoxiously loud plastic whistle we used as a last resort. She took the longest of any dog I ever owned to become housebroken, reluctantly agreeing after six months that, okay, the dining room was not part of “outside”. No roll of toilet paper was safe in her presence. When she was bored, she would go seek one out for her amusement. She was the only dog I have ever shared a bed with, causing us to upgrade to a king-size mattress. This did not last long because her idea of sharing consisted of sprawling horizontally between us pushing with all four legs. One of us woke up with a nose in the face and, the other, something worse.

She threw world-class temper tantrums with such force they caused her steel crate to move across the room and had long conversations with us making sounds like the chatter of a monkey. We referred to this as Grace’s “monkey talk”. One weekend before she was a year old she ate two pairs of prescription glasses costing over a thousand dollars. On the positive side, unlike Halsey (Halsey, Halsey, Halsey…) she was willing to dress up. She had several spiffy coats and happily posed for pictures. 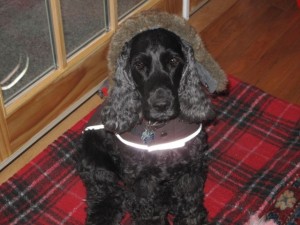 She inherited a dog nanny from Halsey. Devoted to Halsey, Nanny was slow to warm up to Grace (Halsey, Halsey, Halsey…). Grace chose to ignore this and with her needle nose wormed herself straight into Nanny’s heart. Every Tuesday and Thursday, she would wait for the sound of Nanny’s bike bell and off they would go on an adventure.

She started licking the air when she was four; her long pink tongue, reminiscent of a frog’s, repeatedly flicking in and out of her mouth. This can be a sign of serious neurological problems so we took her to see Dr. Lisa Anderson, her vet. Nothing was physically wrong but it seemed Grace had “issues”.  Dr. Anderson sent us to a specialist in animal behavior, otherwise known as The Dog Shrink.

In my writing, I often explore relationships between men and women. How do you know if a man loves you? When Mike agreed to sit for a two and half hour session of family counseling while Grace slumbered on the floor at our feet, I knew for certain he loved me. (He still has no idea what that appointment cost.)  The Dog Shrink felt that Grace needed to bond with Mike. She was confused about the order of our pack. Mike needed to be the one to get up with her, feed her and walk her until her confusion cleared up. Because he loved me, he did, balking only at the suggestion that, at first, he loop her leash through his belt and take her everywhere, including the office. Grace figured it out. Every morning from then on they shared a banana unless the person responsible for the banana purchase screwed up. Mike made sure that Grace understood who that person was. As for the air licking, it was her way of coping with stress, and as a coping strategy, The Dog Shrink considered it to be very benign. She implied we should be careful not to cause the dog any stress!

Three years ago Nanny decided Grace needed a cat for companionship. We had a cat when Grace arrived but she was long gone. Nanny and I went off to the Humane Society and found PeekABoo, soon shortened to Booder. Within two weeks, Booder owned Grace.  Grace had several dog beds scattered throughout the house. The fancy wicker bed with the sheepskin in front of the fireplace in the living room was her first choice  as a spot to snooze. Booder liked it, too, much to Grace’s dismay. On the days Booder got there first, Grace would sit and stare at Booder who in turn would stare back only moving if I inserted myself and told her to get out of the dog’s bed.  On rare sub-zero winter days they would share. 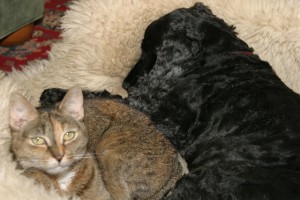 Two years ago, I pointed out to Dr. Anderson that the top of the nails on Grace’s left rear foot were scraped. Sometimes, on our walks I would hear the sound of her nails dragging on the sidewalk. Dr. Anderson checked her reflexes and confirmed they were slow in her left hind leg. She said it was probably a sign of degenerative disk disease. “And where does this lead?” I asked. “Over time to paralysis.” she said.  There was a surgery. It was very expensive, the recovery was at least six months and the end results were often not ideal. “Is she in pain?” I asked. I was assured she was not. I decided not to put my neurotic air-licking ten year-old dog through it and the doctor supported my decision.

The following year the weakness in her leg became more noticeable. Dr. Anderson suggested we could try acupuncture and sent us off to Dr. Gretchen Ham. Grace loved Dr. Anderson but she adored Dr. Ham whose beautiful office on top of a New Hampshire mountain felt more like a study in a country house. Indifferent to the handful of needles Dr. Ham stuck in her back, Grace loved the ultrasound machine the doctor ran up and down her spine. She would tip her head back and croon sounds of pure joy. Dr. Ham gave us another good year.

In November we put a gate on the stairs going to the second floor after Grace took a terrible fall from which she walked away, although I don’t know how. By June, I knew. Her right leg began to give way on her, too. Mike and I noticed that her vision was deteriorating and Dr. Anderson confirmed cataracts advising against surgery. Grace slept more and more both here and in Maine. Nanny shortened her walks, letting Grace meander where she wanted. Having avoided the sun her entire black dog life, she took to basking in its heat  while sprawled in the grass sometimes rolling over to rub her back, her now silver ears spread out around her. She began falling more and more, both forward and backward, sometimes all four legs would go out from under her. I began to dread opening the crate in the morning afraid this would be the morning she would not be able to come out.

Sometimes, she seemed confused when she woke up. Not sure where she was or who we were. I had two tearful conversations with Dr. Anderson. She told me she could not make the decision for me but that in her professional opinion people err on the side of waiting too long. On Tuesday, I watched Grace fall backwards in a heap three times trying to get out of her bed, only to walk five feet and sink to the floor.  I don’t know if she was in actual pain but at that moment I knew for certain life was very hard for her. I knew the question was not how much Grace loved me – I never doubted that – but how much I loved her. I realized that even though my heart was breaking, I loved her enough to let her go.

Last Wednesday, Dr. Anderson gave Grace a sedative and she fell asleep in my arms and then we sent her on her way. The last words she heard were,  “Mama loves Grace.”

I know that many organized religions believe that animals don’t have souls and don’t go on to a better place. These same religions make a point of telling you that God is love. Anyone who has ever been loved by an animal knows that love is pure, unselfish and true. I believe that Grace ran toward the light arriving in a place filled with sunshine, soft grass and mountains of marrow bones there for the snatching. I hope that when my time comes I am judged worthy of joining her and that some times before I get there she cocks her head and remembers: Mama loves Grace. 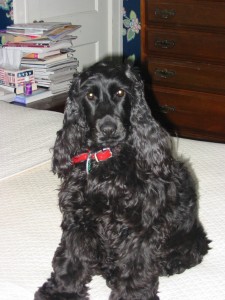 Our beloved Gracie – how we miss her.