“I felt there’s a wealth in Jewish tradition, a great inheritance. I’d be a jerk not take advantage of it.” Herman Wouk

I should begin this review with a confession. I don’t like novels set in the Old Testament. I’m not completely sure why but I suspect it’s based on having been a Catholic schoolgirl in the days when the Bible was definitely off limits as literature.

When I learned that Herman Wouk had a new book coming out last year, I was intrigued because The Winds of War and War and Remembrance are two of my favorite novels. I was disappointed when I learned The Lawgiver was about Moses. I planned on giving it a pass. Then, I happened to hear Mr. Wouk interviewed on NPR by Scott Simon.

Remember, Herman Wouk will be ninety-eight years old in May.  It crossed my mind on learning he had a new book that it might have been written by someone else. The NPR interview dispelled that theory pretty quickly. Listening to Wouk from the perspective of an aging “new” writer, he was an inspiration. Wouk made me feel that I had all the time in the world to become a successful writer. I decided, subject matter aside, I would read The Lawgiver.

The Lawgiver is an entertaining story about a group of Hollywood types: director, producer, movie stars, and scriptwriter coming together to make a movie about Moses. The heroine, Margolit Solovei, is assigned the task of writing the movie script under the watchful eyes of Herman Wouk. In this role, he goes to some lengths to point out that the Moses movie has already been done.  Wouk casts himself in the role of a non-fictional character  in The Lawgiver in the same way he did so effectively with Franklin D. Roosevelt, Winston Churchill and others in The Winds of War and War and Remembrance.

The Lawgiver unfolds almost entirely using letters, emails, memos and Skype transcripts flying back and forth between the characters. While the format severely limits exposition, the reader comes away with a wonderfully complete picture of both the characters and the plot. This has been done before with success. What makes this effort so stunning is that a nonagenarian is employing this device. Herman Wouk is the author of seventeen prior novels demonstrating he is a master of prose. I couldn’t help feeling he was really enjoying himself proving “the old guy” was still capable of learning some new tricks.

Herman Wouk was married for sixty-six years to Betty Sarah Wouk who served as his agent and first reader. She died suddenly in 2011 during the writing of The Lawgiver. She is also a non-fictional character in the story. If for no other reason, Wouk’s depiction of her makes this book worth reading. The Lawgiver is not my typical book, but the power of the writer’s personality compelled me to read it. I was not disappointed. 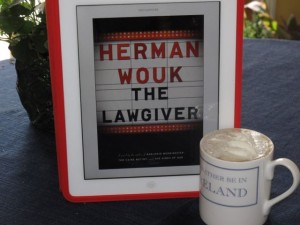