“I’ve been writing since I was six. It is a compulsion, so I can’t really say where the drive comes from; I’ve always had it. My breakthrough with the first book came through persistence, because a lot of publishers turned it down.” ─ J.K. Rowling

Harry Potter and the Deathly Hallows ─ Part 2 is now in the theaters. I probably will not go see it. I have watched two of the movies on HBO and didn’t really like them. But I did sit in the parking lot of Barnes and Noble for five hours on July 21, 2007 waiting for the doors to open at midnight so that I could buy the book. What I remember best about that experience was how nice everyone was. The crowd ran the gamut of Potter fans: families sitting on blankets with sleeping babies, tweens dressed like their favorite Potter characters, teens who had decided that this was cool and adults like me, who just loved the books. Midnight came, the doors opened, and we walked into the store divided by the sections we were lined up in, and bought the book or books.

My sister-in-law, Marian, introduced me to Harry Potter telling me, “You have to read Harry Potter and the Sorcerer’s Stone.” It is a rare book that is recommended to me that I don’t at least look at. Of course, I bought the book, read it, and then joined the ever-growing number of fans who then spent the next ten years waiting for the next six books to come out.

J.K. Rowling can be admired for many reasons. She followed her passion and triumphed over adversity, and in doing so, she instilled a love of reading, and being read to, in a generation of children who preferred their entertainment to be animated. But, I think her greatest achievement is that she gave us Harry and his friends and set them in a motion in a world that was magical in more ways than one, and because, now, like Huck Finn, Tom Sawyer, Scout Finch and Dill Harris, they will always be with us.

As a writer, I am in awe of what Rowling has done with her characters’ voices, growing them authentically from childhood to adulthood, and then reminding us in the end, through the voices of Harry and Ron’s children, that she hasn’t forgotten how to do it.

I know that you might not agree with me, but from my perspective as a writer, the most complicated and evolved character is Severus Snape. I won’t say more in case you haven’t read the books, but Rowling does a brilliant job of showing you and not telling you why Severus is the man he is.

If you haven’t read the Harry Potter series, give yourself a treat for the rest of the summer and do so. I think I will ─ again! 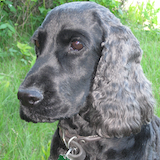 Writing practice went ahoo today because Grace had to be at the vet at 7:30 this morning to have her teeth cleaned. This involved negotiating the hour between Grace bursting exuberantly out of her crate and the time the car rolled out of the driveway without Grace having breakfast.

Breakfast is a big deal to Grace. All food is, but breakfast is paramount probably because it has been at least ten hours since she last inveigled a biscuit from some human in need of her approval. She made her mandatory visit to the back yard, returning to stand at the door, tail wagging,  ready to come in and EAT. It is a testimony to her joyful spirit that she is able to manage this level of enthusiasm every single day for the exact same cup of Wysong. She also shares a banana with her dad. Just to make sure that we don’t miss the importance of this event, she helicopters around twice in a circle.

This morning no food, no banana, no water, and no eye contact from her humans. Grace sits and watches us for a minute and then gets up and takes one furry foot and flips over her food dish. And waits. I break down and start apologizing. “You can’t have any breakfast today. You are having anesthesia, if you eat, you will die.” Grace looks at me and makes a small noise more like the sound a monkey makes than an English Cocker Spaniel. It all adds up to, “Huh? No way!”

She is gone all day and I miss her. She usually spends most of her day snoozing here in my office. Finally, I get a call that she is awake (phew!) minus two teeth and I can pick her up after four. I am reminded that I love this little black manipulator far more than is good for me, as I loved the ten who have preceded her in my life. My books will always have animals in them. My favorite writers usually have animals in their books. Writers are supposed to show and not tell. Nothing shows more about the humans in the story than the way they interact with their animals. Besides, writing about the animals is fun.

Grace is home again. Tomorrow morning, despite the indignities of today, she will bound out of her crate with nothing more pressing on her mind than breakfast.

MacCullough’s Women is a story about a young woman whose husband dies suddenly the week before Christmas. I suppose it is only natural that because I was once a young woman whose husband died suddenly the week before Christmas, I am asked if this is my story. The short answer is no, it is not. But I think the longer answer is more complicated and inherent to the heart of writing fiction. Last month I listened as Tayari Jones answered this same question about her novel Silver Sparrow in an interview with Michele Norris on NPR.

Writers use their own experiences to inform their fiction. What this means is that while the characters and the story are fiction, the experience that the writer adds lends the story its sense of authenticity. Being plunged into the world of young widowhood opened my eyes to the fact that for all of us existing in that gray half-life; it came down to one question: “How well did I really know my husband?”  What I learned from the conversations that I had with many women at formal support group meetings in church basements and informally in friends’ living rooms was that the answers and the stories behind the answers were as different as the women asking the question. In MacCullough’s Women, I try to answer to that question for Franny.  I set the story the week before Christmas because my own experience informed me as to how cruel the juxtaposition of a beloved’s death and the glitter surrounding the Christmas season is.

Amy Hatvany’s novel, Best Kept Secret is the story of a divorced mother who loses custody of her young son because she drinks. This is not a light read and for any mother who has ever gotten drunk or, less threateningly, “tipsy” in front of her children it will be thought-provoking and perhaps disturbing. Best Kept Secret is a beautifully written novel notable for its raw courage and ultimate sense of hope. The characters and the plot are fiction but the story is informed by the fact that Amy Hatvany is a recovering alcoholic.  I highly recommend that you read it.