Have you ever stopped to ponder the amount of blood spilt, the volume of tears shed, the degree of pain and anguish endured, the number of noble men and women lost in battle so that we as individuals might have a say in governing our country? Honor the lives lost for your freedoms. Vote.”  Richelle E. Goodrich

Will you vote today? I ask because so many people won’t. One of the many political canvassers who called yesterday told me turnout is expected to be light this year. The caller asked me to please vote.

I vote, and I always will, not from any deep-rooted sense of civic duty but because of the actions of one man whose name was never on a ballot.

Shortly after I turned twenty-one, I registered to vote. It was June and I drove to the town hall with my birth certificate in hand. With no more fuss than that I became a registered voter.

I came home from college the following November to cast my first presidential vote. It was exciting. I lived in a small town with only one polling place, the gym at the high school. When I reached the head of the line of people waiting to vote, the woman checking off the voters could not find my name on her list. I was bitterly disappointed.

My parents were both there. My mother was a poll watcher and it was my father’s school. So, of course, he was there.

I imagine most small towns in America are the same. In my rural Massachusetts town, everyone knew everyone else. My father, the school custodian, was standing near the door of the gym, making small talk with people as they came and went. I walked over to him. “They can’t find my name on the list.”

“What?” He said. “Come with me.” I followed him across the busy room to where the town clerk was standing.

“She registered last June and she’s not on the list,” my father said after first addressing the man by name. A name I have long forgotten.

“She must be.” The man walked back to where the woman was checking in the voters. Reading over her shoulder, he scanned the list. “ You’re right. She’s not here,” he said. My father said nothing.

“You know, Bud, now that I think about it, there may be a list with more names in a folder at town hall.”

“Let’s go get it.” My father turned and started toward the door leaving the other man no choice but to follow him.

The three of us drove to town hall. Dad and I watched as the town clerk unlocked a file cabinet drawer.

“I thought there might be more. These must not have been added to the voting list.” He was happy to provide a solution.

We drove the ten minutes back to the school. The town clerk handed the list of names to the lady guarding the voting list. “Add these names. We somehow overlooked them,” he said. “And give this young lady her ballot.” My father smiled, thanked the man, and returned to his post near the door.

I voted, casting my ballot for the man who would win that November day. Less than two years later, he would resign the office. My father did not live to see it.

Politics are messy and the rhetoric grows increasingly ugly. Constantly bombarded by social media and intrusive phone calls, it is easy to become disillusioned with the process. It’s easy to talk yourself into believing that your vote doesn’t matter.

Thirty years before that day in the school gym, my father landed in North Africa with the Allied forces. It was the start of a bloody trek up the boot of Italy, including the battle for Monte Cassino, that would result in the liberation of Rome.

Evil today does not wear a swastika. Instead, it hides its face and waves a black and white flag. Evil’s intent, though, remains the same: murder and enslave people and deprive them of their right to be heard.

“What’s the point of voting? My vote doesn’t matter. Nothing ever changes.”

What my father knew and taught me that day in 1972 was the point of voting is that we can. 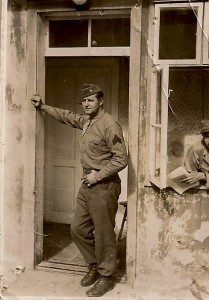