“’Writing is a dog’s life, but the only one worth living.”  ─ Gustave Flaubert

The three animals featured in MacCullough’s Women are real. I changed their names and dropped them into the pages of the book. They arrived there straight from my memory, one because of a promise I made to him. I loved them all. My life has been full of cats and dogs. By the time I am finished writing you might meet them all.

Thomas’s real name was Patrick. My daughter decided he must be Irish because of his orange-colored hair. So of course, he needed an Irish name. He soon became “The Paddy Cat” or just “Paddy”. The first time we saw him he was curled in a ball sleeping in his water dish at the Humane Society. He exhibited (as does Thomas) all the characteristics that make orange tabby tomcats so wonderful. He loved to cuddle, tended to be clumsy, sounded like he weighed much more than he did when he came pounding up the stairs, had the ability to appear to be laughing and ruled the dogs he shared the house with no mercy. I hope you get the picture because unfortunately I couldn’t find one for you. 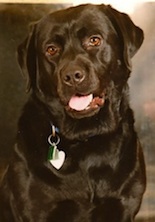 My daughter dropped in to visit on the night of her 21st birthday. She was in route back to Rhode Island with a group of her friends. When she called to tell me she was coming by, she mentioned that she had gotten a dog. I saw Teal’s blocky head and barrel chest coming through the door and I was convinced she was a Rottweiler. “Don’t be ridiculous,” my daughter told me. “She’s an English Lab.”  And so she was, as well as being a love. Teal never met a two-legged person that she didn’t like (small furry four-legged individuals were another story.)  She greeted everyone she met with a present, be it a hastily grabbed toy or, in a pinch, a spare shoe. She loved the car and had a horror of being left behind. In true boomerang generation fashion, she lived with us for four years sharing the house with a rogue springer spaniel who adored her. She put up with just so much of his antics and then would body slam him around the room to let him know who was really in charge. She holds the distinction of being the only big dog my husband has ever loved. We still miss her. 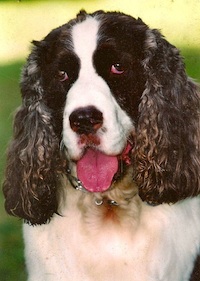 His grandfather, AM CH Sallilyn’s Condor aka Robert won Best of Show at Westminster in 1993. He was named for the last man to hold the rank of a five star admiral in the United States Navy. Halsey was special and he knew it. As an admiral, he outranked the retired Navy commander who paid for his dog biscuits. He was what is known as “typey” in the world of pure-bred dogs meaning he looked the way the standard for his breed said he should. He was funny, a wily thief, brave, stoical in the face of unrelenting pain from a  dysplastic right hip and he held my heart between his snowshoe paws. The winter before he died, there was an article in the Nashua Telegraph about New Hampshire writer, Jodi Picoult.  Her dog, also a springer spaniel, was mentioned in the article and was seated next to her in the accompanying picture. I promised Halsey that he could be in the author photo when I published my first book. Instead, he lives on as Oliver in the pages of MacCullough’s Women.

In case you are feeling sorry for the current occupant of the canine throne, you will be sick of her by the time you finish the third book in the Lynton Series.

“Everybody walks past a thousand story ideas every day. The good writers are the ones who see five or six of them. Most people don’t see any.”  ─ Orson Scott Card

Last Saturday night I went to the fights. I surprised even myself by going. It happened like this. My niece, Brigid, is engaged to the fighter Todd Wilson. Todd was fighting his eleventh fight (undefeated) and my husband and I were invited.  My initial reaction was to stay behind with the women and let the men go to the fight. My inner writer kicked me and said, “Whoa. When do you think you will ever get the chance to go to a fight in the ring again, huh?” So much to the amazement of many people who know me, I went along.

The Writer meets The Fighter

Our seats were high up and far enough way to be ideal for me. I had a panoramic view of the venue and was not spit or bled upon. I also didn’t hear any grunts of pain. There were several fights in addition to Todd’s. The one that surprised me the most was between two young women. And those girls punched.

Here are some interesting things that this writer saw:

Todd won and is still undefeated. And I am pretty sure that there will be a fight in one of my books someday.  It was very informative and FUN.

I want to point you to some exciting new writing. If you like science fiction (even if you don’t usually read it, travel a little), another one of my nieces, Kate O’Connor, has just had a short story, The Sun Dodgers published in the anthology Pressure Suite – Digital Science Fiction Anthology 3. Kate introduces a great character, Amelia Redgrave, who I believe (and hope) we will see more of in the future. Kate is a talent to watch.

If you have read MacCullough’s Women and liked it, please consider writing a review on Amazon.com. MacCullough’s needs at least ten reviews to look credible and we are currently at five. As you will see when you read the ones that are there, the review does not need to be long. Thanking you in advance for your support.