I have been taking a blogging break for the last seven weeks. I gave myself permission to do this based on reading the blogs of some of my favorite authors. Apparently, writers sometimes just wander off and write. Of course, this goes against all the rules in the blogging books. You will lose all your followers, they warn you. Writers are by nature a little odd, (I should know) and they are usually forgiven especially if they produce a great new book.  I am trying…

I have been writing these last few weeks, but my characters have been misbehaving lately, twisting the plot to their own ends, so this weekend I put them all on a thumb drive and took myself off to Bailey Island, Maine to think about how much of this mutiny I intend to let them get away with.

This is the thirty-second summer that I have spent on Bailey Island. Unlike the rest of the landscape of my life, not much changes from year to year. Bailey Island still boasts only four restaurants, a general store and one much visited gift shop, aptly called Land’s End. These summers have blended together in a mist of lobsters, melted butter, laziness, glorious sunsets, frigid water, beloved dogs, too much reading and long conversations with friends. There have been a few that have stood out.

There was the “Summer of the Canasta Game”. That was the year, now long ago, that my daughter, aged six, learn to play this endless game with too many cards. At the end of the summer she had won $712. Fortunately, we were able to buy her off with two stuffed animals and  a monkey (also not real) on a stick purchased at the wonderful gift shop down the road.

We also had the “Summer of the Kayaks”.  After much research, and, in my case, purchasing of appropriate gear and hat, my husband and I each bought a kayak. My husband actually did kayak around the island numerous times. I, on the other hand, did not. The last few years, every Memorial Day, we talk about getting the boats out, and then the thought of hauling them down and over the rocky coast of Maine in front of the house seems to put the project off for another day which has then proved to be another year.

This is the “Summer of the Turkey” or unfortunately, turkeys. One, or even two, picturesque turkeys I was able to live with. They made for interesting party conversation. “Oh yes, we have two turkeys at our house in Maine…” Three years ago, we had two turkeys. Two turkeys that apparently knew each other very well – in the biblical sense, I mean.  There are now nine, three enormous, nasty toms and six nervous hens. My neighbor keeps scaring me with tales of numerous chicks but they stay hidden. I pretend they don’t exist and I am sure you can see why. This herd (really, they are too loud to be called a flock) of  turkeys was around last year but they were not as big as they are this summer. “Been a mild winter,” is what the islanders told me in the way of explanation. It certainly must have been absolutely balmy based on how big these birds are. 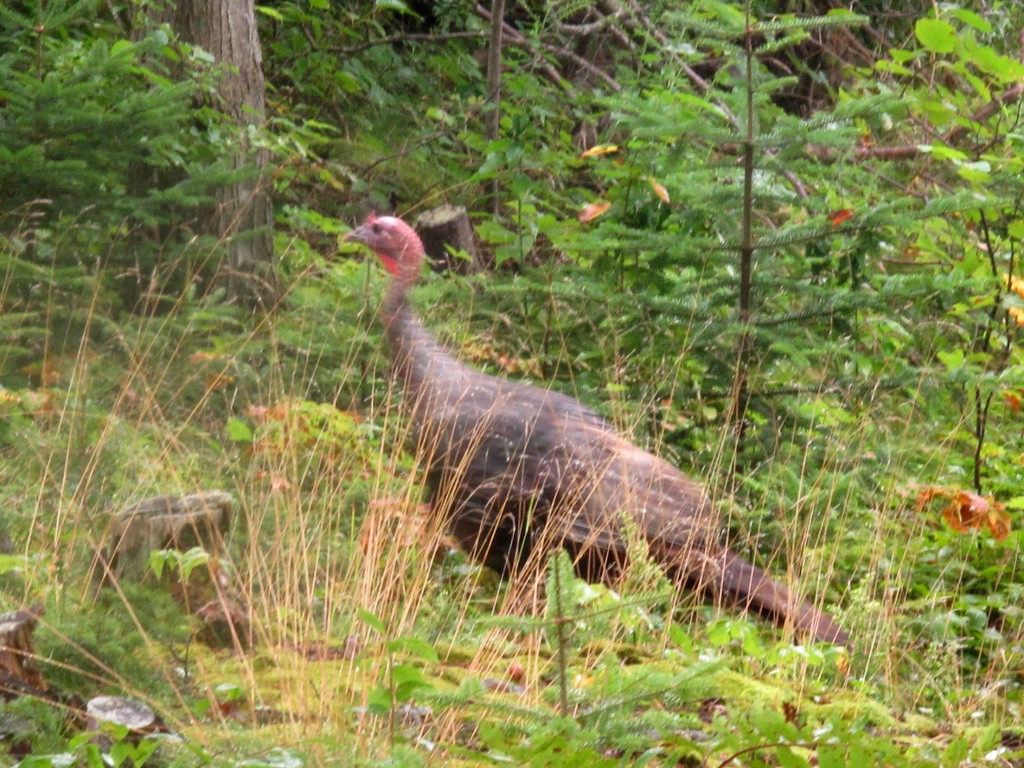 One turkey is quaint.

These nine turkeys live at my house. Fortunately, they do not live IN it, yet. I have nightmares about that because the two trees they roost in are approximately six feet from my bedroom window. Watching them get into those trees every night is truly something. It gives new meaning to the saying, “like a big-ass bird”. The turkey powder room also doubles as my lawn. They talk to each other when they are not thundering through the woods. That cute “gobble-gobble” that you entertain your children with in November is less charming every morning at dawn.

More than two are too many!

Last weekend while the rest of the world watched the remaining events taking place in London, the Bailey Island Turkeys lined up to watch the two fools who clean their bathroom sneak around in the rain. What were we doing, you ask? We were skulking about trying to snap the best turkey picture of the summer, a competition we started in May to distract ourselves. Here are some of the results: 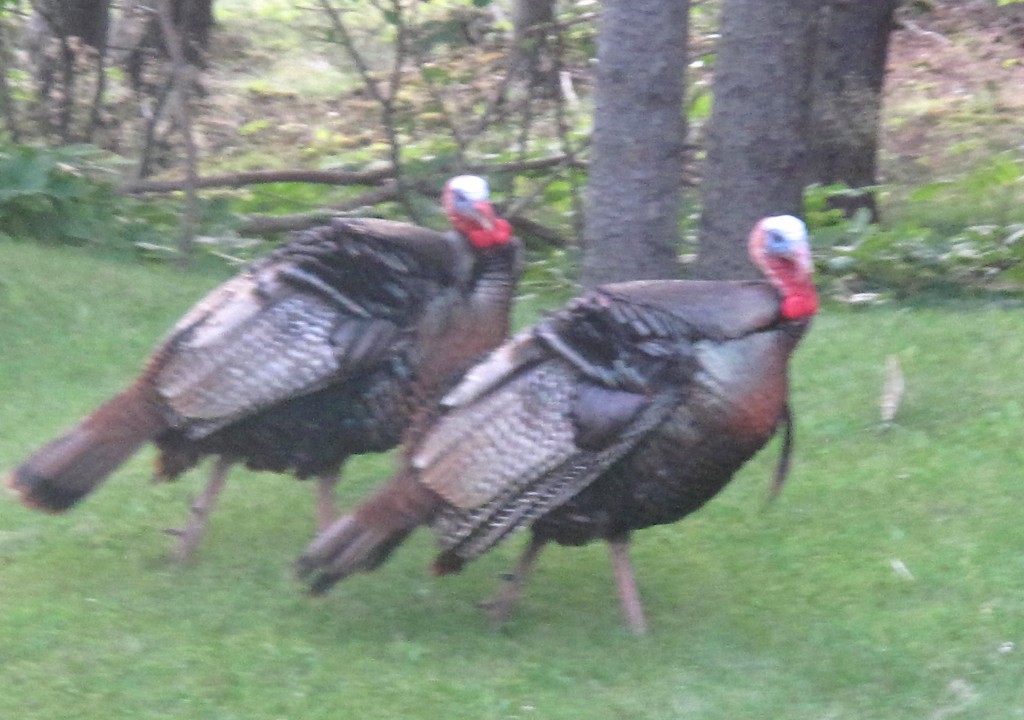 The Toms - Arrogant, aren't they? 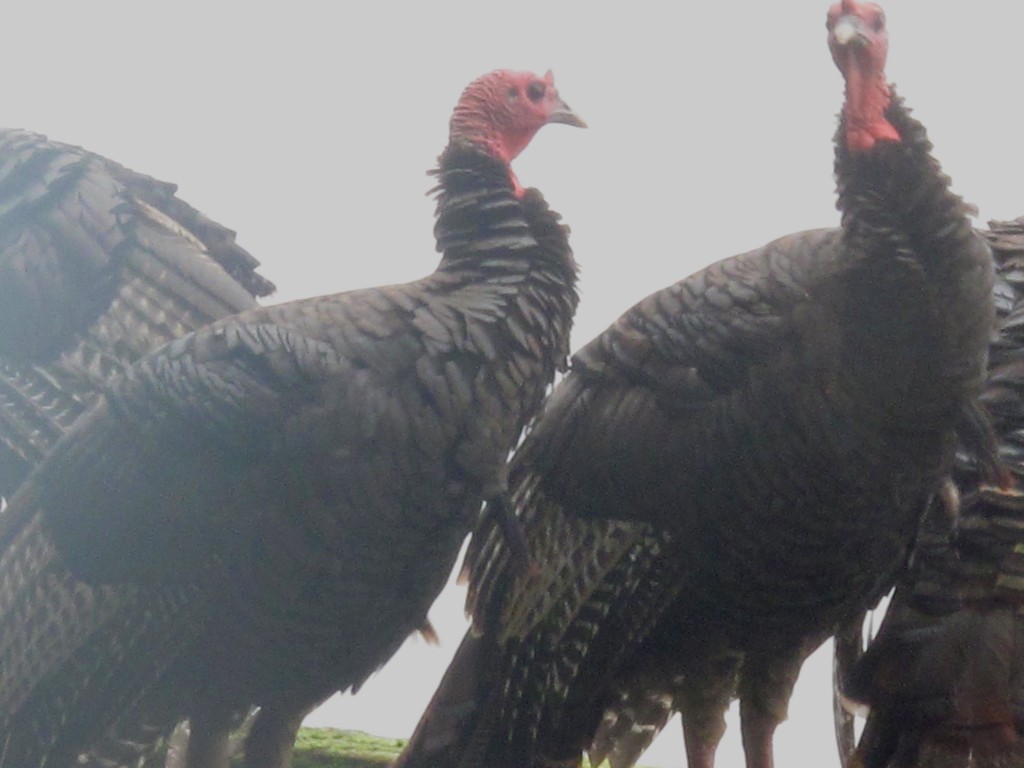 Two of the girls

I have not told the turkeys that my brother-in-law, the Great White Hunter, has offered to swing by on his way back from fighting bears this fall to dispatch them. I don’t have the heart to say yes. People ask me all the time, “Where do you get the ideas for your books?” The answer is: outside my bedroom window.

On the lookout for trouble