“I would advise anyone who aspires to a writing career that before developing his talent he would be wise to a develop a thick hide.”  Harper Lee

To Kill A Mockingbird was first published in 1960. The book was awarded the Pulitzer Prize and gave to American literature, Atticus Finch, one of the most beloved characters ever imagined by a writer. A reported forty million copies of the book have since been sold.

Harper Lee never wrote another book after she wrote To Kill A Mockingbird. Her recently published Go Set A Watchman is the original draft of a story that evolved into the book so many of us first read in school and came to cherish.

I realize it might seem very presumptuous of me to compare myself to Harper Lee. However, if Harper Lee hesitated, you can only imagine how hard, indeed, terrifying, it is for the small indie writer to “do it again.”

I have wanted to be a writer since I was in the fourth grade. My father, always my champion, urged me on. Life and a lack of courage intervened. I wrote and published MacCullough’s Women four years ago to see if I could be a writer. Enough people told me they enjoyed it for me to feel good about having written it. I had written a book. “See that, Dad!” I told my long-dead father.

While I was working on MacCullough’s Women, the idea of creating a series of four books set in my fictional little city of Lynton, New Hampshire began to grow. My novels are character-driven and I love my characters. They are almost real to me. As much as I was happy and relieved to finish the book, I also felt a sense of loss. What was going to become of Franny? Were Brid and Neil going to have more than a fling? Would Sofia ever grow-up?

I am happy to offer you Francesca’s Foundlings, the second book in the Lynton Series. Francesca’s Foundlings is the story of an unconventional family, complete with an imperious cat and a grieving Tibetan terrier, created from need and bound together with love. In today’s global world, where individuals often live far from the families into which they were born, you will discover more and more families like this one. Maybe even your own. 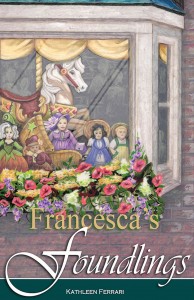 The Lynton Series is about women and the men they love. Women who though flawed, prove themselves to be resilient and willing to change in order to meet the challenges life throws at them. Women very much like those who read my books.

Roskerry Press has just launched the e-book version on Amazon (link to Kindle version).  If you do read it soon, please post a review.

The paperback version will be released later this fall.

Thank you all for your interest and support. My readers (you!) are the best.