“Happiness will never come to those who fail to appreciate what they already have.” –Source Unknown

Weddings and funerals never fail to bring out the best and the worst in people. Maggie Shipstead’s delightful novel, Seating Arrangements, is no exception. Written from the point of view of the bride’s father, Winn Van Meter, the novel is about a WASP wedding set on an island, Waskeke, off the New England coast. Done before? Certainly, but Seating Arrangements brings its own twists and turns to a story that has been used so often it is a cliché. I promise you that Shipstead’s plot will keep you from being bored.

The bride, Daphne, is gloriously and unrepentantly pregnant – about seven months – which requires last minute alterations to the wedding dress. It is not, however, Daphne’s pregnancy that causes the angst in the novel, but the much-discussed abortion of her younger sister, Liva. See what I mean?

There are lots of elements of satire here, at times veering close to slapstick. The names alone take you to a place where I have never lived: Biddy, Oatsie, Piper, Greyson and Mopsy. Really. Naturally, everyone went Ivy, predominantly Harvard and Princeton. And of course, there is the drunk but very witty aunt of the bride, Celeste, to keep things from getting too stuffy. Throughout the book, Winn’s main preoccupation is being accepted as a member in the Pequod, the private golf club on the island. A prize that, despite his obviously stellar  (at least to him!) credentials, has so far eluded him.

It would be easy at first glance to dismiss this book as so much fluff, especially if you consider things like the exploding whale, but I urge you not to. The book’s appeal lies in the search for happiness that can be seen in all the main characters. A search that strikes a cord, even if you have never known anyone who actually wears red pants embroidered with white whales. Maggie Shipstead, as every writer should, shows you which of her characters are able to adjust in ways that allow them to seize happiness when they see it and those who can’t. No matter where you come from, this should feel familiar to you. 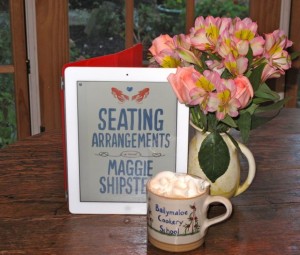 Who doesn't love a wedding?

(I apologize for the lateness of this post. As they would say on Waskeke, I was “indisposed” for a few days.)