This past Sunday we celebrated Father’s Day. Last year, I posted a blog about my father, Bud Ferrari. In reading it over, I found that I really had nothing more to say. He was a great father. I was lucky to have him for my dad.

I thought I would write a few words about all those other guys who step up, step in and, on Father’s Day as they do on other important days in a child’s life, are gracious enough to take a step back.

If there is a role more difficult than that of a stepparent, I don’t know what it is. No one comes into that job prepared for what will be asked of him or her. A stepfather arrives in a child’s life because of a loss, either of a family through divorce, or of a person through death. It is a relationship that is built upon the fact that someone that child loves is no longer there every day or at all. To say that it is overshadowed by memories of the past is an understatement.

“You’re not my father!” is the ancient battle cry of every stepchild. (Even the man who led the donkey on the road to Bethlehem heard this.) Stepfathers are there when Dad isn’t.

Stepdads apply a band aid, run beside the new two-wheeler, drive the carpool, coach a team, scare away the monsters from under the bed, carry a child into an emergency room, write a check, (or slip a twenty into a willing hand) prevent the mother from killing the kid, arrive just behind the tow truck, run through the streets of Boston in the heat of a late August afternoon to obtain a critical document before the place it needs to be closes, and lug a steamer trunk up five flights of a college dorm.

There. Rarely complaining and often taken for granted. “Not Dad.”

These guys are easy to pick out in pictures taken at family events. You find them standing in the back or off to the side because as they are well aware, they are NOT Dad. They are gracious and self-effacing. They do not presume or assume but make no mistake their contribution can’t be minimized.

What the kids whose lives they helped repair and complete will remember about them is that they were there and in the end what name they were called didn’t really matter. What mattered was that in good times and in bad, they were always ready to reach out a helping hand or offer a word of encouragement. 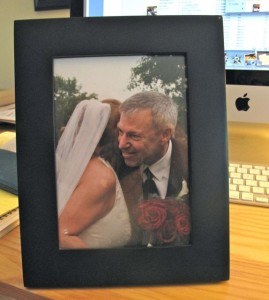 One of those guys... (Photo Credit: Tom Gibbons Photography)

Happy Father’s Day to all the stepdads, uncles, older brothers, godfathers and friends who step in and make a difference in a child’s life.