“Those who can truly be accounted brave are those who best know the meaning of what is sweet in life and what is terrible, and then go out, undeterred, to meet what is to come.” ― Pericles

My husband is a man of many cousins and this weekend we went to Elmira, New York to say farewell to one of them. The memorial service for Gary O’Connor was one of the most impressive I have ever attended. As a writer, I pay close attention to words. The words the eulogists used were carefully chosen, clearly articulated and spoke of a life both relished and well lived.

Sitting there, watching the widow as she cradled the flag, the word that kept rolling through my head was courage. A latecomer to the family, I was only with Gary once at a family party before he was diagnosed with ALS, more commonly called Lou Gehrig’s disease. Since then, I was struck by his ability, any time I was with him, to turn the focus away from his increasingly diminished body to the person he was talking to, so that you forgot that he was sick, as he drew you out about yourself.

We love stories about courage. Usually, the word is bolded and bracketed by gore and glory. The soldier, gun blazing, saving a wounded comrade or the firefighter racing into a burning building to rescue a child are what we love to read or hear about. I am not trying to take anything away from these brave acts, but courage comes in another form, too.  A muted but equally steely resolve to face the unthinkable without complaint, and meet destiny head on without calling attention to yourself. A courage easily overlooked in our busy world. This was the courage that Gary displayed for the last six years. It brings to my mind the following lines, written by the poet, Emily Dickinson:

To fight aloud, is very brave –

But gallanter, I know

Who charge within the bosom

The Cavalry of Woe –

We trust, in plumed procession

For such, the Angels go –

Rank after Rank, with even feet –

And Uniforms of Snow.

I will never read or write the word courage again without thinking first of Gary O’Connor.

Gary fought passionately against this horrific disease, raising thousands of dollars for the Robert Packard Center for ALS Research at Johns Hopkins. His team, Low & Slow, will be running in the Fiesta 5K again this year to raise money for ALS research. I know that personal life experience shapes our charitable giving, but if you are looking for a good cause, please consider helping to eradicate this terrible disease. 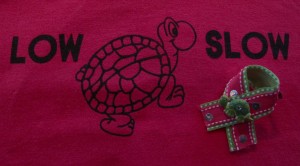