“The Lords of Elfland are true lords, the only true lords, the kind that do not exist on this earth: their lordship is the outer sign or symbol of real inward greatness. And greatness of soul shows when a man speaks. At least, it does in books. In life we expect lapses. In naturalistic fiction, too, we expect lapses, and laugh at an “over-heroic” hero. But… in fantasy, we need not compromise.”— Ursula Le Guin

Like every good English major, I read J.R.R. Tolkien but with that exception I came late to the world of fantasy fiction.

Warrior of the Three Moons, by J. Michael Robertson, the first book of The God Wars of Ithir Series, is the book that opened the door to fantasy for me. I got lost in this story flying from Boston to Boise on a business trip, barely noting when the plane began its decent.

Warrior of the Three Moons is the story of Ciaran, a young Scotti warrior, chosen by the Goddess, Danu, to be her champion in the battle against the forces of Darkness. In order to successfully fulfill his role, against seemingly insurmountable odds, Ciaran must first find the lost Sunspear. What makes this book stand out is the detail the author uses to sketch the richness of the world against which the story unfolds, replete with The Celtae, Ring Lords, Shadow Trolls, Skull Warriors, Shadow Priests, Elves, Faery Folk and Trollhounds. Interlaced at every turn of the plot throughout this story are the women: among others, Kiara, Ciaran’s shield sister, Scathach, the Blademaster, Rillsong, the Faery Princess, and Isengael, the Shadow Druidess. The characters are complex and believable giving depth to the story.

The writing is lyrical, lifting the story above the limitations of the genre. This comes as no surprise, as the author is also a published poet. At the same time,  the battle scenes are taut, written with a career military officer’s insights and expertise.

If you have never read fantasy, this is a great book to start with. I hope you enjoy it as much as I did. 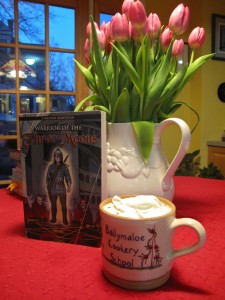 My key to the world of fantasy fiction