The difference between a successful person and others is not a lack of strength, not a lack of knowledge, but rather a lack in will.”― Vince Lombardi Jr.

Among the many treasures my marriage brought to me were eleven nieces and nephews. My blog today is about one of them: Brigid McEvilly Wilson.

Her uncle nicknamed Brigid and her younger sister, “The Squeaks” because like most little girls they talked in high-pitched voices when they were excited.  Despite the nickname, Brigid tended to be on the shy side. While she was reserved, in everything she did, be it Irish Step Dancing, swimming, or her beloved horseback riding, she always participated with her whole heart.

One day I was sitting on the deck with my mother-in-law watching a swirl of grandchildren racing around and she leaned over to me and said, “Kathleen, you watch Brigid.”

We offered all of our nieces and nephews the opportunity to go to Outward Bound when they turned sixteen. Brigid was one of the kids who decided to go even though it involved getting on an airplane something she was terrified of and avoided whenever she could.

My husband and I picked her up at the end of her course. I was horrified to see a raw and painful abrasion on one of her legs extending from her ankle to mid-thigh. At that point it was several days old and it still looked awful. We asked her what happened.

“I slid down the rock face and scraped it. They said I could go home but I promised Gib (her grandmother) I would finish. So I stayed.”

Yesterday, she participated in the Timberman Ironman 70.3 in Gilford, NH. There were 2000 participants competing in an open water swim, bike race and half-marathon. Watching to see her as she came out of the water after her swim, I was slapped smartly on the arm as she flashed by me as if to say, “Hey, pay attention.”

Waiting for her to finish the bike race, the chair next to me was unoccupied, as her yellow bike streaked around the turn, I thought I heard her grandmother say,“Kathleen, you watch Brigid.” Her grandmother is gone now and when I turned the chair remained empty.

Brigid finished her race with a time of 5:57:48. We had such a wonderful time watching with her dad, Eamonn McEvilly and her husband, Todd Wilson, our brave and beautiful Brigid. 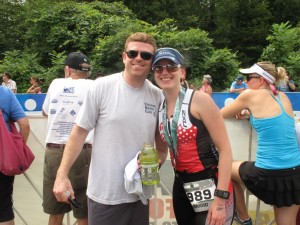