You need three things to become a successful novelist: talent, luck and discipline. Discipline is the one element of those three things that you can control, and so that is the one that you have to focus on controlling, and you just have to hope and trust in the other two.” ― Michael Chabon

I have decided  — I admit with some trepidation — to start blogging again. Blogging is one of those things that you often hear people say brightly at social events, “I think I might like to do that.”  I know I have said it before in this blog, but it’s worth repeating. Blogging is not for the faint of heart.

You would think that writers would excel at blogging, wouldn’t you? I mean what is it but writing? It turns out as a general rule writers approach blogging with reluctance and a certain amount of resentment. How do I know this, you ask?  I have spent the last five months reading blogs in an effort to crack the secret of being a successful blogger. I focused on writers whose books I like to read. One of the new rules of being a writer is we are all supposed to have blogs. We are also supposed to be thin, young and very photogenic which is even harder to pull off then writing a consistently good blog.

I discovered that with few exceptions, writers have a tendency to break the first rule of blogging — they blog whimsically rather than on a set schedule. Some (like me, I am sorry to say) can go months without a new post appearing. This is very bad blogging behavior. Every course/book on blogging tells you so because it annoys your readers. Guess what?  Take it from me, it does.

Why don’t writers follow the rule? I have read this in numerous places while doing my research. Writers very often resent having to take the time to blog because they would much rather spend their time writing their books.

I may be especially stubborn but I don’t drift away from the offender like the blogging police say I should. I keep checking, often to be disappointed. Fortunately, those writers can’t hear what I say when I discover yet another day has passed without a new post. On days there actually is a new post and I am delighted because when writers do write a blog post, it’s almost always good.

There are exceptions — writers who blog without fail on the schedule they told you they would.There are writers who manage to produce an excellent blog post every day. I think those writers might have “people” who write their blogs. Some writers can afford to employ “people” who manage their social medial commitments.

Unfortunately, I am the only person in this office. I do have a dog, a cat, a goat, a mouthy mandrill named Simon the Snark (who has appeared in this blog before) and a fairy whose name is Kren who also hang out here with me. None of them ever produces a blog post or much else. 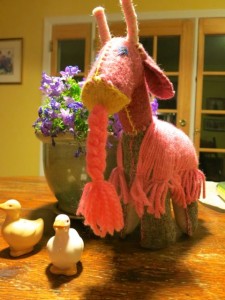 Sullivan the Goat – One of my “people”

My plan is to start with a post on Monday that covers topics such as: my novel in progress, my characters, my writing practice, what’s going on in the world of publishing and whatever else presents itself. There might even be a good recipe or two thrown in. On Fridays, I will recommend a book. I prefer the verb recommend because I don’t really do book reviews. I read a lot of books and I only recommend a small subset of them. I don’t like to condemn the ones I don’t like because I know what it takes to write a book.  It’s like telling someone their baby is ugly. You are smart enough to figure out what’s wrong with a book without my help. I enjoy sharing with you the books I have found to be worth reading.

Please feel free to comment.  See you on Friday.