“All the art of living lies in a fine mingling of letting go and holding on.”  – Havelock Ellis

Meg Mitchell Moore tells a story within a story in her novel So Far Away, seamlessly integrating the past with the present. This is a book about women. The men are consigned to play supportive roles. The writer effectively captures the voice of each generation even though these voices span more than a hundred years and cross social classes.

A story of mothers and daughters, one who has lost her child and one who is losing hers. This book will ring true with any mother, but especially single mothers, who have raised a teenage daughter alone.

Kathleen Lynch, the main character, is an archivist working at the Massachusetts Archives in Boston when Natalie Gallagher, a lonely teenager from Newburyport, walks into the Archives looking for information for a school project. Kathleen lives a small life that is centered around her job, and her aging dog. She is not getting any younger herself and is haunted by the loss of her daughter, Susannah. A loss she feels is somehow her fault. In her mind, she is constantly trying to figure out what she should have done differently.

The character of Natalie brings to the reader a chilling insight into the devastating impact of cyberbullying. I felt myself overwhelmed by the desire to do something to help this girl but at a loss as to what I, or Kathleen Lynch, could do.

Sprinkled throughout the book is the story of a “bridget” the name by which all female Irish servants were called. The character’s name is actually Bridget O’Connell. A fact her employer finds vastly amusing. Bridget’s story captures the immigrant struggle and accurately depicts the hardships of the life of an Irish serving girl in Boston, as well as both the good and bad characteristics of human behavior that never seem to change.

Apart from the excellence of Moore’s writing, there are personal reasons that So Far Away caught my eye. The main character and I share a first name, I was once the single mother of a teenage daughter, and my grandmother, Catherine O’Connor, was a “bridget” in a large house in Boston.

So Far Away is a nuanced book. Look a little deeper when you read it. I thought the actions of the minor character, Elsie, were especially interesting.  A great book, I strongly recommend it. 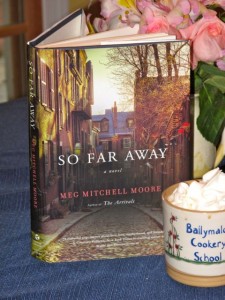