“Uneasy lies the head that wears a crown.” – William Shakespeare

The strength of historian Juliet Nicolson’s novel, Abdication, lies not in the plot but in the sense of  the very specific time and place it brings to the reader.

The story opens with the death of King George V and the passing of the throne of England to his son Edward VIII known to his friends as David. Like most historical fiction, Abdication, is a story layered within a story, written in a way that the fictional characters merge seamlessly with those who were actual people.

Nicolson introduces us to the fictional Evangeline Nettlefold, Wallis Simpson’s childhood friend from Baltimore. Evangeline, an overweight spinster who has come to England to stay with her godmother, Lady Joan Blunt, serves as a foil for the new King’s married mistress. Wallis Simpson is portrayed true to history as brittle and scheming as she plots to find a way to land the most sought after man in England. This friendship, initially cast in a positive light, sours in a way that does not flatter either of the two women.

Nicolson uses the fictional characters, May Thomas, Sir Philip Blunt’s driver and the idealistic Oxford student, Julian Richardson, to flesh out the portrait of an England ripe for change in the years just prior to the Second World War.

Abdication skillfully weaves British Nazi sympathizer, Sir Oswald Mosley, founder of the British Union of Fascists, and the growing fear of the Nazis into the story providing insight into why the Duke and Duchess of Windsor, as David and Wallis would later be known, would long remain controversial figures on the world’s stage.

Seventy-six year have passed since Edward renounced his throne in order to marry the American divorcee from Baltimore. Having lived through the saga of Charles and Diana, it is difficult for us to imagine what the flap was about.  Abdication provides a window into the morals and temper of the time in which their story unfolds.

As a young teenager, I read A King’s Story, the memoirs of the Duke of Windsor. (I told you that I read anything and for some reason the book was on the shelf in my home when I was growing up.) So of course I had to read this book. 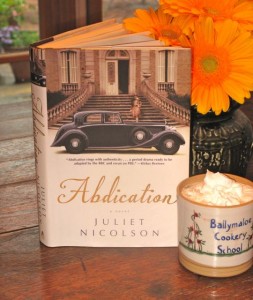