““Whatever else is unsure in this stinking dunghill of a world a mother’s love is not.” – James Joyce

Last year, I wrote a blog post on Father’s Day about my dad. It makes perfect sense that I would write about him before I wrote about my mother because he was the sun around which the rest of us revolved. My mother was content to stand in his shadow. It wasn’t until after she was gone, I realized that he was the sun because she put him there at the center of our universe.

When I am stuck trying to figure out who a character is, I will take his or her first name and list all the adjectives beginning with the same letter that describe the person I am writing about. My mother’s name was Gertrude, and she hated it. She compromised by going through life known as Gert – never Gertie or Trudy. Here are some of the adjectives that describe her: gentle, generous, gifted, grateful, and gorgeous. But mostly, she was just good. 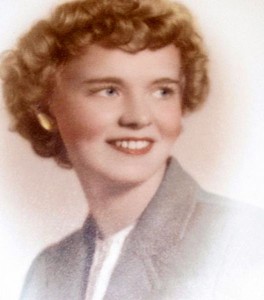 She was a good wife, a good mother, a good worker, a good Nana, and a good friend.

She taught me to always send a thank you note and to bring a meal to a home where someone was sick or bereaved. I still make her “from scratch” brownies because they taste so much better than the ones made from a mix, and because as soon as I begin to bake them, I am awash in memories. I see her carefully trimming the edges – “You never give those to guests.”- and placing the perfectly cut squares into a Filene’s box lined with wax paper. When she was satisfied with how they looked, she would stand back and smile.

She was not quite a year old when her mother died in the 1918 flu epidemic. She inherited her pedal sewing machine as well as her talent as a seamstress. She used this machine, considered to be state of the art when it was first purchased, from the time she was a girl. The sound of her feet pumping that sewing machine was the background music of my childhood. I believe now that she continued to use it, long after it had become obsolete, because it was her one tangible connection with her mother.

My mother sewed beautifully. She made slipcovers, curtains, clothes, doll clothes and supplemented her income for many years by making and selling Raggedy Ann and Andy dolls. She could also knit, crochet, embroider, braid rugs and quilt. She tried her best to pass these talents on to me but I was a disappointment. Much to her frustration, I always had my head in a book. Fortunately, my sister would prove to be as talented as she was and carries on the tradition of making beautiful things.

The gift my mother gave to me was the example of her perseverance. She faced life with determination and grace. No matter how difficult her life was, she carried on, trusting God and her own ability to keep on moving forward, to make it through the day. She wasted no time feeling sorry for herself. Her faith never wavered. During the darkest days of my life, it has been mother ‘s voice, I have heard in my head telling me to get up and to keep going.

I am embarrassed to say I took her for granted, never stopping to realize that she would not always be there. There is not a day that goes by, I don’t think of her, and wish I were more like her.

4 thoughts on “Remembering my Mother”