“ It’s a funny thing, but today the Titanic is probably much more – that is people are much more aware of it than they were in 1954, when I was doing my research.” – Walter Lord, author of A Night to Remember

April 15th is the hundredth anniversary of the sinking of the Titanic. That alone was enough to draw me to Kate Alcott’s, The Dressmaker. I love reading historical fiction set in this period and extending through the 1940’s. I think this is because it provides glimpse into the times that my grandparents and parents lived their lives as young people.

The Dressmaker is historical fiction at its best. Alcott places a fictional character, Tess Collins, a talented seamstress, forced by circumstances into the role of a lady’s maid, into the path of a real Titanic passenger, Lady Lucille Duff-Gordon on the dock in Cherbourg, France waiting to board the ship. The story, fast-paced and laced with actual facts and real people, will keep you reading.

Due to the popularity of the movie most of us saw in 1997, the story of the Titanic’s ill-fated voyage is well known. Lucille Duff-Gordon, the non-fictional character at the heart of the book is not. She was a fashion designer, known as “Lucille” famous for her translucent, floating clothing in the early years of the twentieth century, who dressed royalty, rich women and movie stars. Also making a cameo in the story is her sister the writer, Elinor Glyn. The facts around Duff-Gordon’s escape from the sinking ship in Life Boat Number One and the resulting scandal are well researched and told with the added panache of a fiction writer’s color.

Equally interesting to me, especially in these controversial times, is the hope of the immigrant experience illustrated by the story of the fictional character, Tess Collins. It reminds me once again that so many of us, proud to call ourselves Americans today, are here because a grandparent or great-grandparent (Me – Irish, Italian and Swiss) made that scary crossing in the bottom of some ship.

From the writer’s perspective, The Dressmaker provides an interesting insight into what it takes to successfully sell a novel today. This book is actually the sixth novel written by Patricia O’Brien. Now in her seventies, O’Brien’s agent initially was unable to sell this book. It was only after O’Brien changed the writer’s name to that of a “new” unknown author, Kate Alcott, that she was successful. The Dressmaker written by Kate Alcott sold in three days. The result is a great read that helps to connect us with one of the sea’s most tragic and romantic stories. 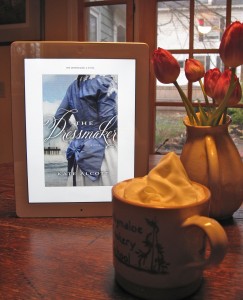 Step onto the Titanic

I hope you enjoy it.