“Lack of clarity is a writer’s truth” ― Amy Tan

The first time that I ever encountered mahjong was in Amy Tan’s wonderful novel, The Joy Luck Club. This is the story of a woman who forms the Joy Luck Club for the purpose of playing the game of mahjong during World War II as a way of coping with the horror surrounding her. She forms a second club with three friends she meets at church after she immigrates to America. If you haven’t read it yet, treat yourself. The story celebrates the complex relationship between mothers and daughters.

Mahjong is a game that originated in China, commonly played by four players. It is played with a set of 136 tiles based on Chinese characters and symbols, although some regional variations use a different number of tiles. In most variations, each player begins by receiving thirteen tiles. There are fairly standard rules about how a piece is drawn, the kinds of melds, and the order of dealing and play.

Last winter, I was thrilled when my neighbor invited me to be part of a group of women she was getting together to play. We use the mahjong set that her mother, who was Japanese, brought with her when she came to this country from Japan. The set, consisting of tiles made from ivory and backed with the smoothest of wood, is old and very lovely. The writer in me can’t help but think of all the women who have touched those tiles since the set was made. I wonder what they talked about as they played. We often mention Mary’s mother even though we never met her.

None of the three women invited had played before. We all love the game and enjoy the feel of the tiles in our hands  and the clacking sound they make as we play.

Yesterday, we met for third time congratulating ourselves that we are definitely getting better. Although I have not yet won a hand, I found myself “waiting” twice which means that I was very close. 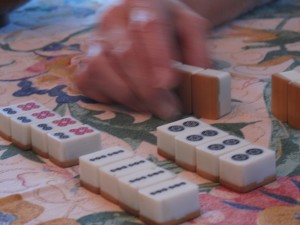 Three kongs. Unfortunately, not in my hand

Most women have enjoyed playing cards since they were young girls. I can remember spending hours over the summer as a preteen playing endless games of canasta or gin rummy with my friend Phyllis. We giggled about boys and shared secrets as we played.

Yesterday, our hostess made a delicious chicken curry salad for lunch. We enjoy snacks (calories don’t count) as we play and share laughs and a secret or two even though we are no longer girls. We have a rule that what we discuss around the mahjong table stays there.

Last month we decided to swap unwanted jewelry. Yesterday it was cookbooks. We all went home happy after spending a pleasant afternoon together.

Do you get together with your women friends on a regular basis? What is that you do together? 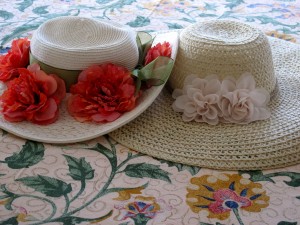 Did I mention that in celebration of the gorgeous day two of us wore hats?