“Everybody walks past a thousand story ideas every day. The good writers are the ones who see five or six of them. Most people don’t see any.”  ─ Orson Scott Card

Last Saturday night I went to the fights. I surprised even myself by going. It happened like this. My niece, Brigid, is engaged to the fighter Todd Wilson. Todd was fighting his eleventh fight (undefeated) and my husband and I were invited.  My initial reaction was to stay behind with the women and let the men go to the fight. My inner writer kicked me and said, “Whoa. When do you think you will ever get the chance to go to a fight in the ring again, huh?” So much to the amazement of many people who know me, I went along. 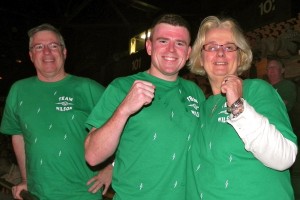 The Writer meets The Fighter

Our seats were high up and far enough way to be ideal for me. I had a panoramic view of the venue and was not spit or bled upon. I also didn’t hear any grunts of pain. There were several fights in addition to Todd’s. The one that surprised me the most was between two young women. And those girls punched.

Here are some interesting things that this writer saw:

Todd won and is still undefeated. And I am pretty sure that there will be a fight in one of my books someday.  It was very informative and FUN.

I want to point you to some exciting new writing. If you like science fiction (even if you don’t usually read it, travel a little), another one of my nieces, Kate O’Connor, has just had a short story, The Sun Dodgers published in the anthology Pressure Suite – Digital Science Fiction Anthology 3. Kate introduces a great character, Amelia Redgrave, who I believe (and hope) we will see more of in the future. Kate is a talent to watch.

If you have read MacCullough’s Women and liked it, please consider writing a review on Amazon.com. MacCullough’s needs at least ten reviews to look credible and we are currently at five. As you will see when you read the ones that are there, the review does not need to be long. Thanking you in advance for your support.