Why did God make women so beautiful and man with such a loving heart?”― Walker Percy, Love in the Ruins

I was intrigued by the idea that a wife and an ex-wife could be friends when I was working on the plot of  MacCullough’s Women. I wanted to write a novel that explored that idea. I concluded while it makes perfect sense – obviously they have at least one BIG thing in common – the only way it might work would be if the husband in question was dead. I added that element to the plot ; and MacCullough’s Women was born.

I am not alone in exploring the idea in fiction. If you read a lot, you know very few plots are unique. Human behavior being what it is, not all that much changes besides the supporting details; letters written with quill and ink give way to texting. I was intrigued to see what Amy Sue Nathan would do with the idea in The Glass Wives.

The plot of The Glass Wives swirls around the two wives – Evie, the first wife and Nicole, the second –and  the three children of the late Richard Glass. Some of the story is predictable; Richard leaves Evie and their twins for Nicole, his much younger hair stylist, and then has a baby with her. I found it confirming my own theory when Nathan chose to kill off the husband as a means of opening a path between the two women that doesn’t exist while he’s alive. This is not a spoiler; the reader knows he’s dead in the first chapter. Money  – who has it, how much is enough and where and how to get more of it – drives a lot of this plot. This is often the case in blended families and Nathan does an excellent job of portraying its impact on the two women.

The Glass Wives examines how a family is formed and mutates in today’s world where people are often brought together through divorce and remarriage. The novel is the story of what comprises a family as much as it is about the relationship between the wives. The make up of family, both what it means to be one and what it consists of, is featured in a lot of women’s fiction today. This makes sense to me because historically it is women who nurture family.

I hope you enjoy the book. Do you think wives and ex-wives can be friends? 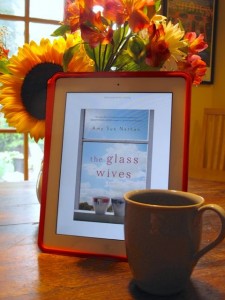