Write the kind of story you would like to read. People will give you all sorts of advice about writing, but if you are not writing something you like, no one else will like it either.” ― Meg Cabot

This week I am recommending a mystery for you from Hank Phillippi Ryan. I had the pleasure of hearing her speak at a book signing last week at the Nashua Public Library for The Other Woman.

Hank Phillippi Ryan is a well-known television journalist in the Boston area currently doing investigative reporting for Boston’s NBC affiliate. She brought with her lots of star power – she’s earned 27 Emmys – dazzling the audience who had braved a very rainy Thursday night here in Nashua to hear her speak. I am a Massachusetts girl, born in Somerville, the daughter of Boston-born parents and raised in Littleton. As I told you in an earlier blog post, I love books set in places I know. The Other Woman takes you from the Esplanade to Springfield and back again with stops along the way without a misstep. Ryan gets Massachusetts.

The main character, disgraced television news reporter Jane Ryland, reduced to reporting for a second string Boston newspaper, has been assigned to get an interview with Moira Lassiter, the wife of one of the candidates in the Massachusetts Senate race. Jane is more than a tad over-qualified for her job and in doing her background research she can’t help but notice that a certain woman in a red coat is everywhere Governor Lassiter is. Convinced this is the other woman in the handsome candidate’s life, Jane persists in chasing what she believes will be a scoop that may restore her reputation as a news reporter.

The Other Woman plays out against the subplot of The Bridge Killer who may or may not have serially killed three women and then dumped them under a convenient bridge. The situation causes a growing sense of unease in Boston, a city whose residents are no strangers to serial killers. The detective in charge of the investigation, Jake Brogan, would like to have more than a professional relationship with Jane, who reciprocates the feeling.

I have been reading mysteries since I was a preteen – a long time.  I pride myself on being able to finger the bad guy or guys by the end of the fourth chapter. Ryan stumped me almost until the end of the story with the twists and turns of her plot and her numerous potential other women. The Other Woman is a wonderful kickoff to her promised series.

The Other Woman quite rightly received a Mary Higgins Clark Award for 2013. Hank Phillippi Ryan’s experience in the world of news reporting comes shining through providing the story with clarity and credibility. If you like a great mystery,  I think you will enjoy it. 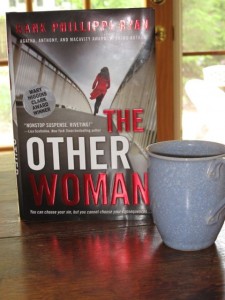